Our instructors are volunteers who compete in the sport(s) that they teach. 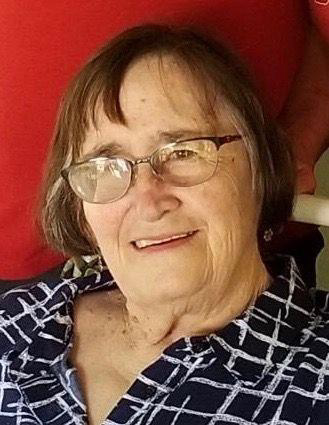 Mary Price is the director of training at Quincy Kennel Club and teaches both beginning and intermediate obedience classes and conformation classes. She has trained dogs since 1967, started with her own dog. She was immediately asked to be an instructor by longtime club member Gladys Rupp, and has been involved in training since that time.

Mary currently owns two Chihuahuas (one smooth-coat and one long-coat), one toy poodle and one Chinese Crested. She has previously owned Australian terriers, a Japanese Chin, a Shetland Sheepdog and a Bearded Collie. She bred a couple of litters of Australian terriers in the early 70’s and later bred Chihuahuas.

She has shown over 70 different breeds in AKC and UKC shows. She has put many championship titles on several breeds with many group placings. One of her Chihuahuas was in the top five in the country for several years, winning eight Chihuahua specialty shows. (Those are large shows, up to 300+ dogs in competition, all Chihuahuas, although some were under 100.) She has also put CD and CDX titles on dogs in obedience. She wishes that rally and agility had been around when she was actively showing in obedience.

Before Shar Peis and Australian Shepherds were accepted by AKC, Mary was approved to judge them at their specialty shows and also judged their obedience. She has judged all groups at both AKC and fun matches and was honored to have been selected to judge sweepstakes at several Chihuahua specialties, including the Nationals in San Francisco and Chicago. Judging the puppies was always her very favorite thing to do.

The most challenging situation she faced with her own dogs was shortly after she started training in obedience. Her teacher used very rough methods, and Mary followed her lead. In preparation for her very first obedience trial, her loyal sweet, gentle Australian terrier, Saucy, wasn’t sitting when she stopped, so Mary corrected her. It made her worse so she corrected the dog again, harshly. Mary says it taught her the best lesson she ever learned, and that was to be patient and loving. Saucy was so upset she suddenly completely shut down and couldn’t remember anything she had been taught. Needless to say, they were not successful at their first trial and it took a couple of weeks before the dog trusted her again. Mary says, “You have to be able to read your dog or you shouldn’t train. It seems I always learn the hard way.”

The most rewarding aspect of training is when someone comes to her with a dog they were going to give up on and she is able to turn things around and make them best friends. Mary feels so fortunate to be able to spend so many years doing what she loves with dogs she learns to love. And she like the owners too, for the most part! 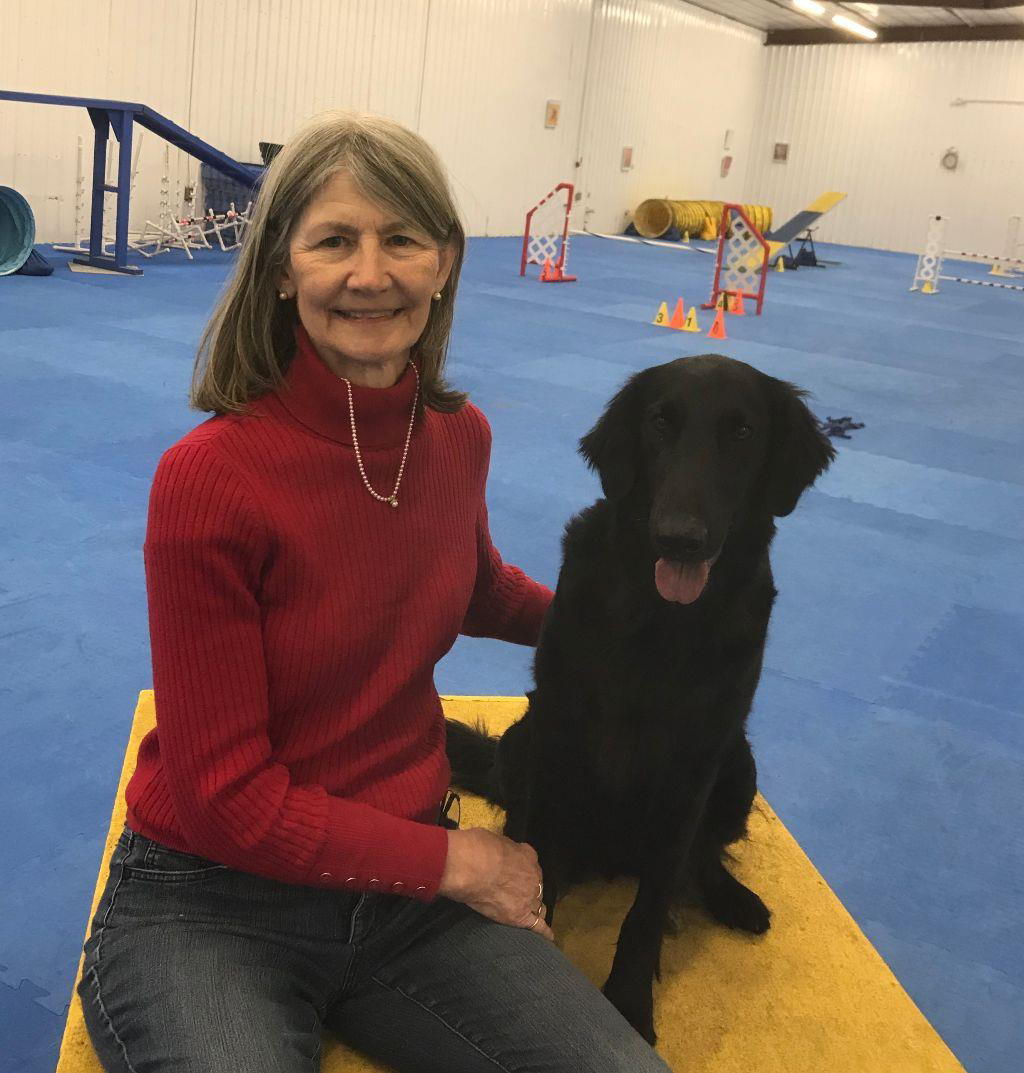 Ann Behrens teaches puppy class, agility, and occasionally an advanced obedience class. She also coaches students in rally and tricks training. She has been training dogs at QKC since 1971 and started teaching there in 2017.   She owns two flat-coated retrievers, but has also owned an Irish Setter, Golden Retriever and a Brittany. Her older dog has earned the Grand Champion conformation title, and also the CD in obedience, Rally Master, Master Standard Preferred and Excellent Jumpers Preferred titles in agility, the Advanced trick title and Advanced and Urban Canine Good Citizen titles. She has earned the Achiever Dog designation with AKC, which means she has titled in three or more different dog sport venues. The younger dog is a puppy and learning not to eat things!  Ann is a STAR Puppy evaluator, CGC evaluator, Trick evaluator, Temperament Test evaluator and an ACT evaluator for agility.

Personal training challenges have included a three-year stand-off with the teeter with one dog, who eventually mastered it. The best part of teaching is watching the bond grow between handlers and their dogs, particularly in puppy class. 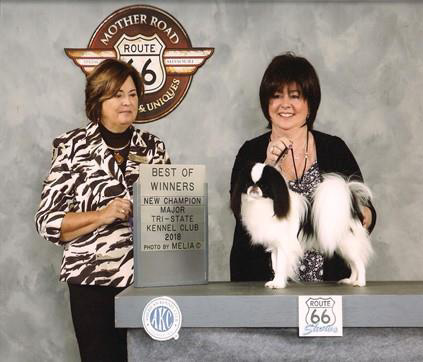 Kathryn Buch (Kat) teaches beginning and intermediate obedience classes at QKC and sometimes assists in conformation. She has been teaching since 2010, but has been training dogs since she was a young child, helping her grandfather. She trained her own Boxer from a paperback book and started taking classes at QKC in 1996.

Kat owns four Japanese Chin and co-owns a Dog, and a Bitch from a litter she bred in 2018. She has also owned a Poodle, Boxer, Rottweiler, Min Pin, and three Pugs. Kat has put Champion, Grand Champion, and International Champion titles on dogs she has owned, and has also put CGC titles on the Pugs. Her most challenging training situation was with a dog she owned who was very fearful of people and had no socialization. It was a long process to build her confidence and she credits Mary Price with guiding her through the process successfully. She finds helping her students understand and build meaningful relationships with their dogs to be the most rewarding aspect of teaching.

Kat also hosted Pug Meet ups once a year at the Quincy Kennel Club Building for 5 years. She had loads of fun with pug people and their pugs. 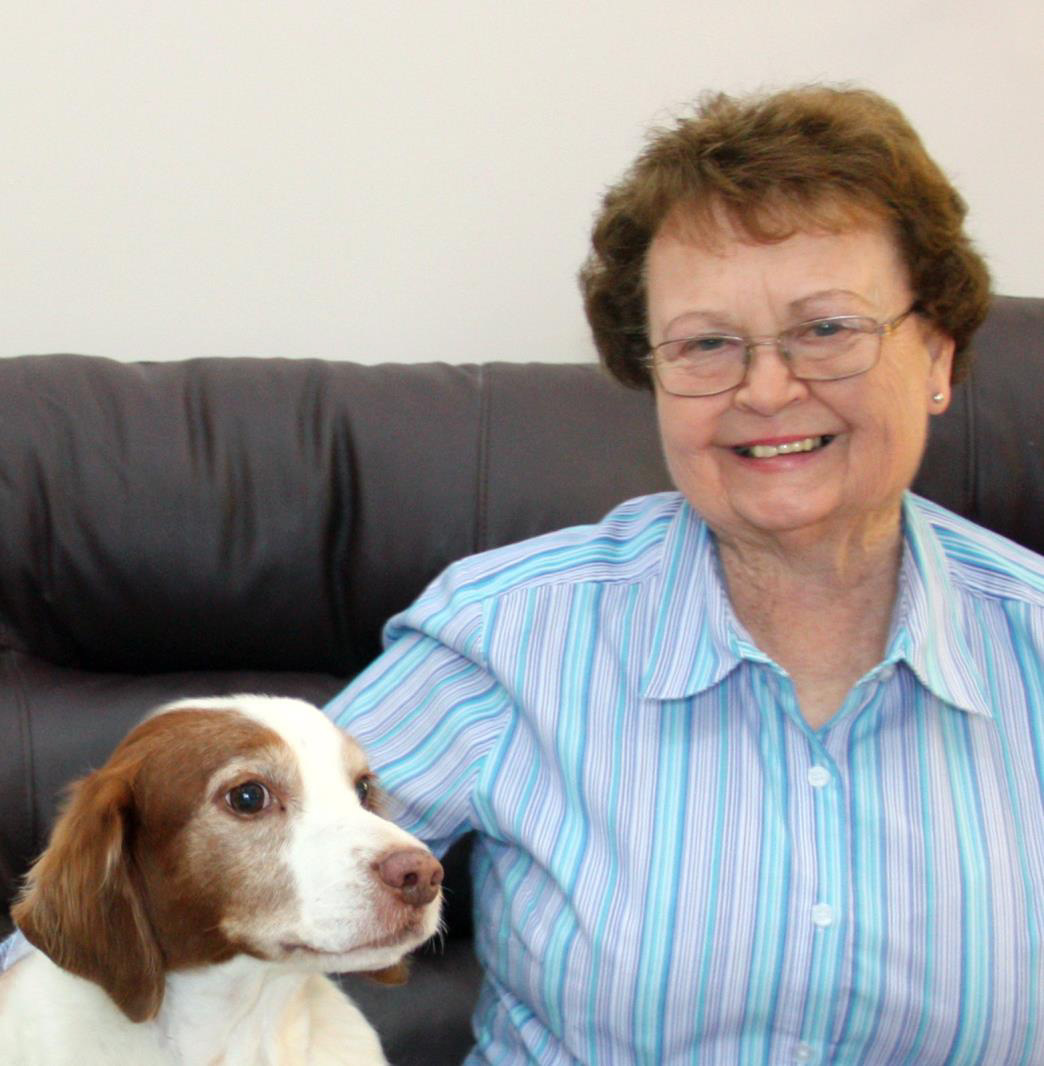 Jane Huelsmeyer started training dogs 20 years ago when she got her first show dog and took conformation and obedience classes from the Quincy Kennel Club.  Her show dogs have completed  conformation titles in AKC, UKC and International venues and started agility competition.  Jane took over teaching the Kennel Club’s Agility classes ever since.  Jane’s Brittany’s, Sparky and Molly, completed their Master Agility titles and went beyond to one  Bronze. With her third Brittany, Nike, she added titles in Canine Good Citizen, Obedience, Rally, Barn Hunt, and Scent Work.

This broad background in dog sports and 34 years teaching in public schools, has given Jane the ability to help dogs and handlers improve their skills so they can enjoyed working together as a team. 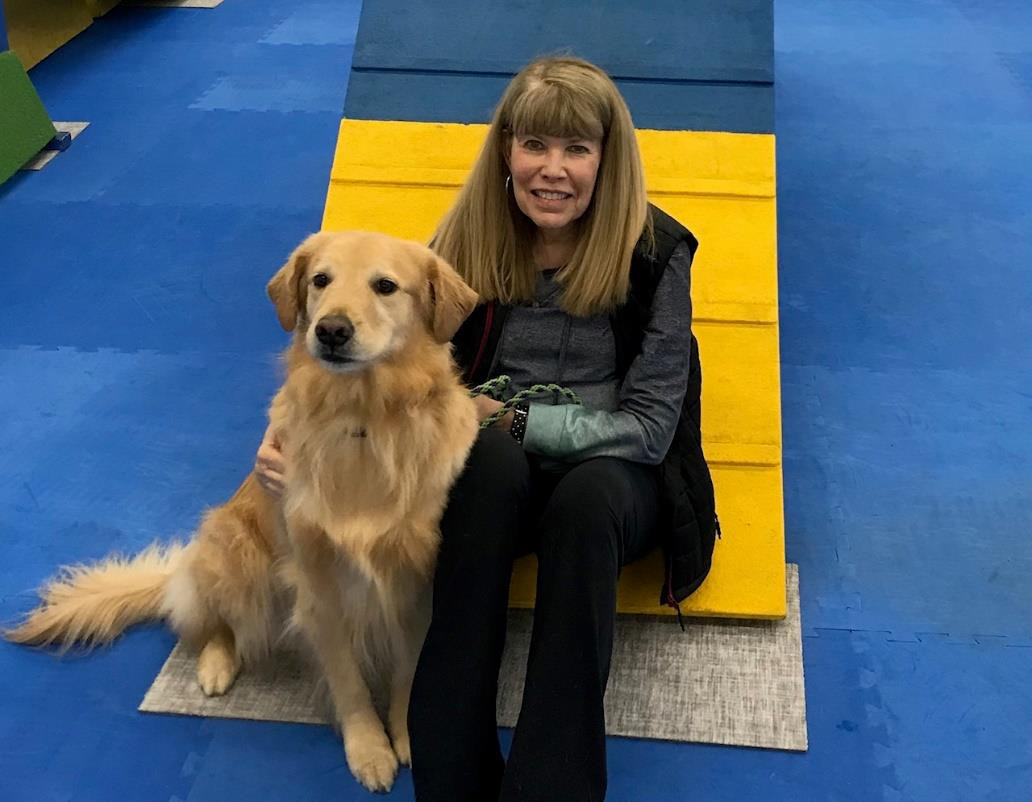 Linda Snider teaches beginning obedience and CGC classes at QKC. She has taught here for 10 years and has been training dogs for twice that long. She currently owns two golden retrievers and one mixed breed, but has also owned a collie, cocker spaniel, and a Scottish terrier. She has put a CD, CGCA, RA, TKN, NAJ, and NA titles on her dogs. Her young golden is pointed in conformation and her older dog is an AKC achiever dog. She also had an older Golden who was a Rally National Qualifier. Linda is a certified AKC Star Puppy, CGC, and AKC tricks evaluator. She says that her four-year-old dog is the smartest dog she has ever owned but as a puppy they had problems with attention and behavior. Perseverance was the key and he has emerged as a fabulous dog, although he still has “Golden” moments

The thing she enjoys most about teaching is to see the dog and owner finally making a connection and advancing through the class levels or competing. Outside interests include music, spending time with her grandchildren, and attending dog shows.

Laura Hampsmire assists with the Puppy class and has done so for 2 ½ years. She first started training with her own dog nine years ago and has achieved a CGC title and OAJ and OA titles in Agility. She currently owns a Pembroke Welsh Corgi and a German Shepherd. Her greatest challenge in training her own dog has been keeping him in a down-stay.

Laura enjoys cooking/baking, reading, and crafts. Laura feels the most rewarding aspect of teaching is seeing the progress owners make with their puppies in just a few weeks. 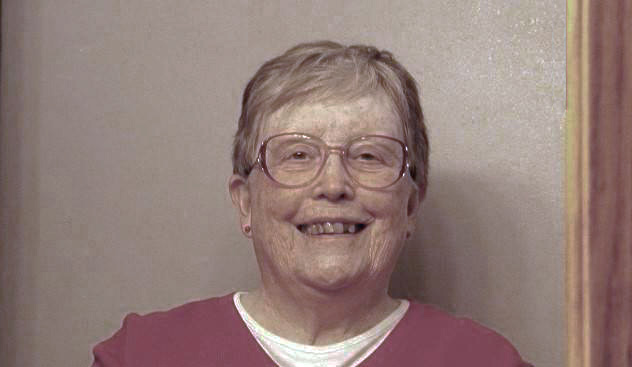 Susan East teaches basic obedience in both private lessons and group classes. She also coaches the Demo Dogs drill team. Over the last 60 years, both in the United States and overseas, Susan has trained guide dogs for the blind, security and personal protection dogs, as well as a lot of family pets. She’s owned German Shepherds, Doberman Pinschers, German Shorthaired Pointers, a Weimaraner, a Dachshund, and an Akita. Her current companion is a German Shorthaired Pointer, Anika, who is a true Dirt Road Diva.

Her favorite thing about teaching is seeing the moment when students and their dogs finally start working together as a team. In her spare time, Susan enjoys writing.